Joe starred as JD the Master of Ceremonies for Just Dance Live! An interactive concert, rave and dance party based on the hugely popular game, Just Dance. Joe had the crowd dancing, singing, tossing beach balls and living it up - even got in a few circus skills as he juggled three snowballs and walked on a rolling globe. [video]

In 2015 Joe appeared as a featured character in Take That's international tour TT3, in scenes he helped design and develop. He also created a series of masks for the iconic Men in Coats. His collaboration with the British pop sensations began in 2008 when he first appeared in their TV special, Take That Comes to Town. In 2009 he was cast as Balón, the high-flying ballonatic in The Circus Tour, helping to design and develop the opening sequence. [video]

Collaborating with director Kim Gavin, Joe was featured in both the Olympics and Paralympics Closing Ceremonies. The image of him waving the British flag atop a replica of Big Ben was featured on news sites around the world. His work on the Dreamers sequence for the Closing Ceremony led to the raising of the Paralympics icon. And he got to 'conduct' the rocking Hackney Colliery Band.

This mad comic catches fruits & vegetables on his face. Trying to open the wine he ends up in a one-arm handstand on top of the bottle. Bon Appetit is a combination of Clown and Bouffon, slapstick and rambunctious audience participation. [video]

A homage to the great silent film comedians, this acclaimed show combines acrobatic slapstick, ingenious audience play, and an inventive use of simple props to create a unique comic performance. [video] 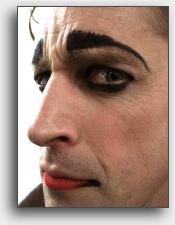 With influences ranging from the Tibetan Book of the Dead to Mad Magazine, the Medieval Feast of Fools to Monty Python, Freud & Jung to Moe & Curly, PEEL uses ingenious mask work and physical comedy to tell the story of one man's breakdown and the power of humour to heal. [video]

A comic tale of office boredom that takes off into absurd flights of the imagination, featuring visual arts, circus skills, slapstick comedy, magical effects, pop up puppetry and clowning. [video]